skip to main | skip to sidebar

Much to Be Thankful For...

We hope you all had a wonderful Thanksgiving! We spent the holiday with Dave's family in Waco and had a wonderful time of rest and relaxation! For that, we are thankful! Katelyn just turned three months old (see picture below)! She is becoming more and more confident (read: loud) in her "talking," smiling what seems like every time we turn around, and holding her head up on her own! We are so thankful for the joy that she brings to our lives each day! 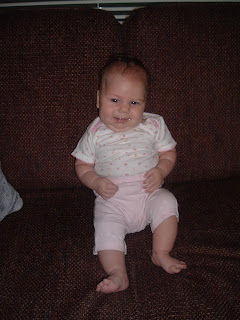 Dave and I also went on a fun date while we were in Waco! Below is a picture of us right before we walked out the door. Katelyn enjoyed time with her Grandma Pam while we went to Fuddruckers to enjoy time with a yummy hamburger and then to Starbucks for a warm gingerbread latte!! It was so fun to spend time together just the two of us! We look forward to many more dates to come! 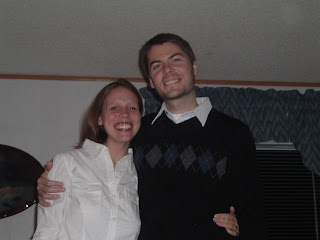 We are so excited to have Dave home! We missed him dearly and are enjoying our "family reunion." Funny story: Whoever had grand visions of a wife running to greet her husband (after his absence on a two and a half week business trip) with a long embrace followed by several minutes of uninterrupted, loving gazes into each other's eyes OBVIOUSLY did not have a two and a half month old!

Dave's flight was scheduled to arrive at 6:12 p.m. Katelyn and I left in plenty of time to get to the airport. However, about halfway there, Katelyn decided that she wanted to eat a little earlier than normal, and she proceeded to loudly let me know about it! As I was driving and Katelyn was wailing, Dave called to let me know that his flight had just pulled into the gate. I explained to him that I really wanted to be able to meet him at the baggage claim area, but that as he could probably tell by the screaming in the background, Katelyn was not in the mood to wait, and I would need to feed her in the parking lot. I told him to give me a call when he had his bags, and I would pull around to pick him up. He said he would just plan to call me on my cell phone, and I could tell him where we were parked so I wouldn't have to get out of the car. Sounded good. So I pull into a parking space and went to get Katelyn out of her carseat. As I pick her up, I noticed that apparently, she had gotten so upset during our trip to the airport, that she had what we like to call a "blowout." It's exactly what it sounds like. I figured I would spare you any pictures in this particular blog entry. At this point, I knew I didn't have an option...we needed to go in the airport so I could change her diaper and her outfit (so glad I had a spare!). As we walked into the airport, I saw the baggage claim area that I knew Dave was supposed to be at. Sure enough, as we walked past a few people (all of whom were staring at the backside of sweet Katelyn), we spotted him. I walked up to him with a smile, and as I did, Dave saw the back of Katelyn, and we both just gave each other a side hug. I quickly headed to the bathroom (which thankfully was located right next to the baggage claim area AND had a changing station!!), and began the changing process....and I do mean process. About ten minutes later, we emerged from the ladies room as new women....Katelyn in her new outfit and clean diaper and me with a renewed spirit of humility. Welcome home Dave!!
Posted by Dave, Kristen, Katelyn, Anna, and Ben McCurdy at 7:44 PM No comments:

We had such a great time with Dave's grandma, Aunt Rachel, and mom (from left to right in the picture below) in Waco this past weekend! 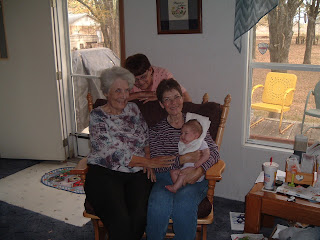 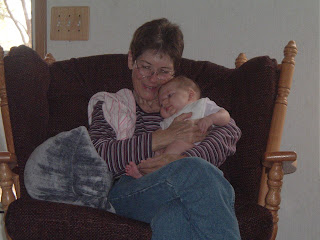 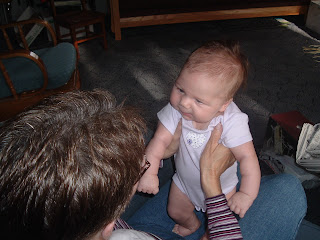 Katelyn and Kristen had such a fun time in Austin this past week with Mamaw and Pepaw (Kristen's mom and dad)! These pictures will give you a little clue into just how much fun.... 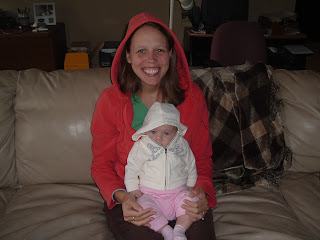 Katelyn and Kristen "in the hood." The weather turned cooler so we had to bundle up before going outside for a walk. 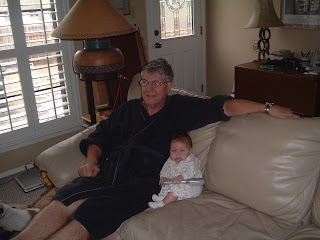 Katelyn and Pepaw spent some time bonding in front of the TV together! Pepaw even gave her control of the remote!!

K&K are leaving today for a weekend visit with Dave's mom and family in Waco. Dave is due to return back to Dallas on Friday, November 16th. He is working really hard, but we can't wait for him to be back!
Posted by Dave, Kristen, Katelyn, Anna, and Ben McCurdy at 7:45 AM No comments: 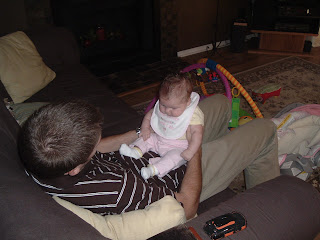 Well, the plan was for Kristen and Katelyn to leave Wednesday, October 31st with Dave for the first few days of his two and a half week business trip to Atlanta. Unfortunately, the couple we were planning to stay with had to come to Texas because the husband's mother is having health problems. While they still insisted that we stay there (Dave thankfully still is!), they were hoping that K&K would wait and come with Dave on his next trip to Atlanta so we could all really enjoy seeing each other and spending time together! So....K&K will wait until January to visit. In the meantime, K&K have headed down to Austin a few days early (did we mention that Katelyn slept THE WHOLE carride??!!) and are enjoying time with Kristen's parents! On the way back from Austin to Dallas, they will spend a weekend with Dave's mom in Waco and be back in Dallas by November 12 (Dave is scheduled to return November 16). Lots of traveling for the McCurdy family! Please pray for safety in all of our travels and a productive time for Dave as he works hard to accomplish many tasks in Atlanta. Thank you!! Pictured above: Daddy and Katelyn share some sweet moments of "conversation" before Dave leaves for Atlanta.
Posted by Dave, Kristen, Katelyn, Anna, and Ben McCurdy at 9:30 AM No comments: